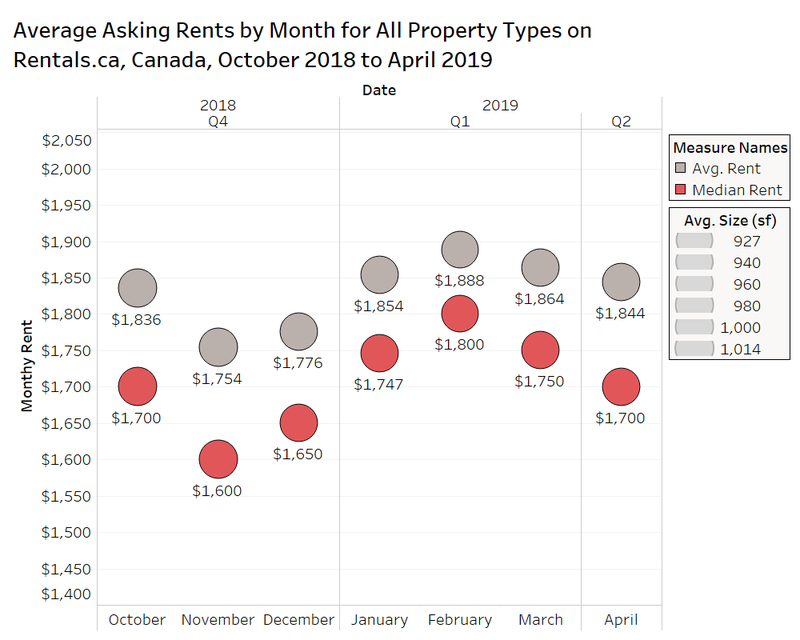 Breaking down the Rentals.ca data by property type shows that single-family units (single-detached and semi-detached) increased by 0.2% month-over-month, while condo apartments increased by 2.0% in April over March to $2,467 per month on average.

Because the majority of listings on Rentals.ca are rental apartments, the decrease in average rents in April ($1,502 to $1,491) resulted in a decline overall.

Because of the small sample size of basement apartments, there is more monthly volatility in the average rental rate. 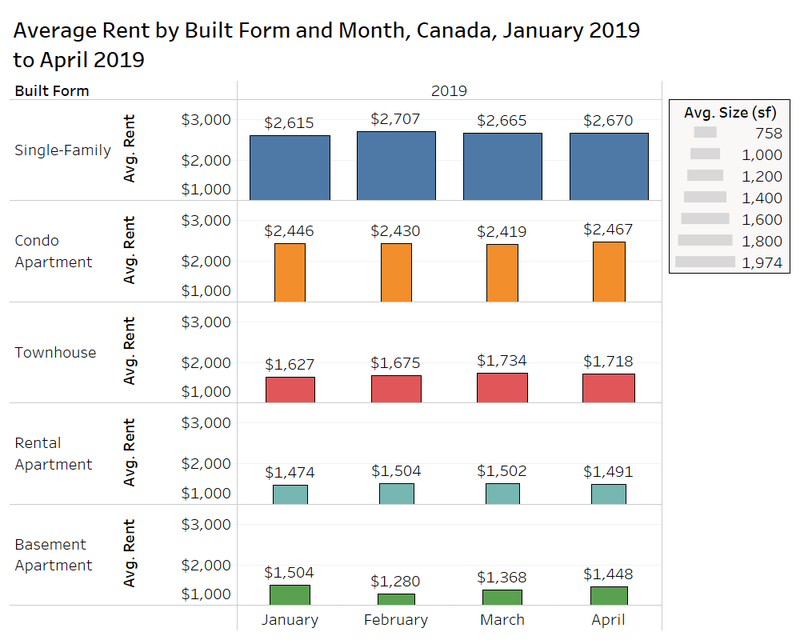 When conducting a more apples-to-apples comparison of monthly changes, the chart below looks at the average rent and average unit size for condominium apartments and rental apartments in Canada over the past three months on Rentals.ca. 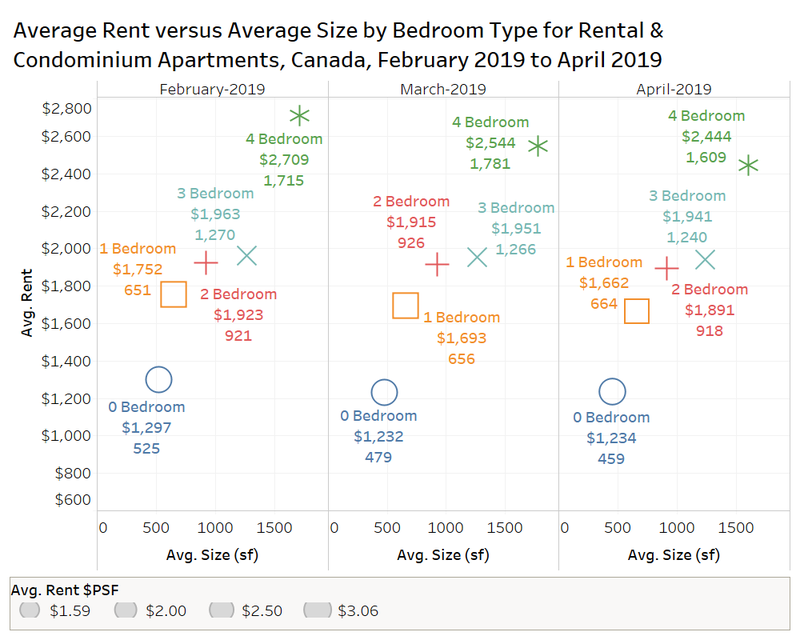 On a provincial level, Ontario had the highest rental rates in April, with landlords seeking $2,189 per month on average (all property types), an increase of 1.3% from March ($2,162). In British Columbia, the average asking rent was $1,682 per month, an increase of 4.4% month-over-month, the second highest monthly growth among the provinces in April (Manitoba: 5.1%). Asking rents in Alberta have decreased in April by 0.7% from March, while average rents in Nova Scotia dropped by 1.4% monthly.

It should be regularly noted that monthly changes, both up and down don’t necessarily reflect big increases or decreases in demand, but can be the result of changing the composition of units available for rent on a monthly basis. The Rentals.ca data is asking rents only, and landlords often overprice their listings, which can skew data as well. 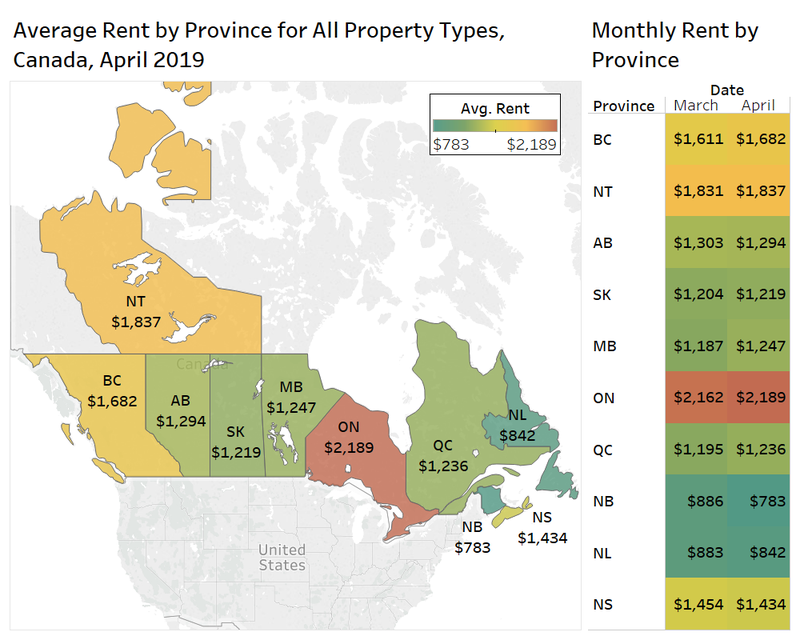 Another factor that can influence the rental rate in each province is the share of units by bedroom type. The chart below shows the suite mix breakdown for rental apartment listings on Rentals.ca for six provinces in April (excludes four-bedroom and five-bedroom units).

Quebec has the most studios as a percentage of all listings at 14%, topping Nova Scotia’s 13%. Studio units account for just 3% of listings in Manitoba.

In Manitoba, nearly 23% of rental apartment listings have three bedrooms, compared to just 7% in British Columbia. 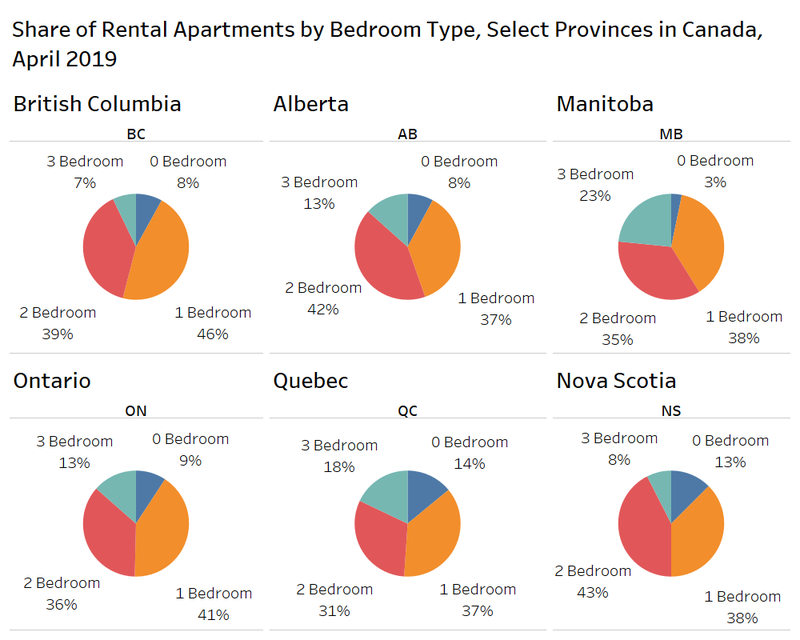 Investors have been purchasing condominiums to lease them out more frequently in recent years, especially in Ontario and British Columbia. The average unit sizes and rent per-square-foot (psf) for condo apartments on average in the two provinces is pretty similar, as shown in the chart below. 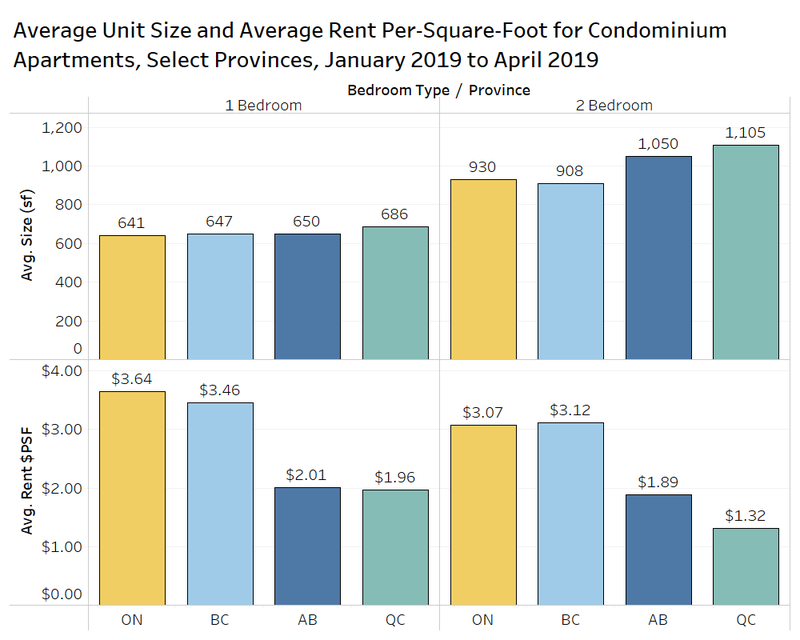 The chart below shows the average asking rents for condo and rental apartments, as well as the overall average for all property types (singles, townhouses and basement apartments added) for select municipalities in Canada.

Tenants looking to rent an apartment in Mississauga will likely pay about $200 less per month than in Toronto for one- and two-bedroom units, when considering the average rental rates. 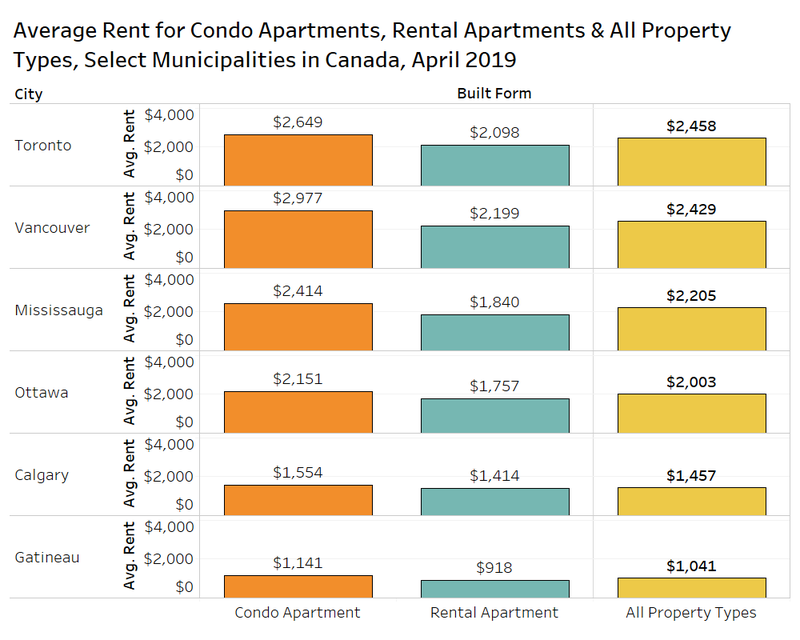 When looking at the average rent per-square-foot for apartments with condominium or rental tenure, and plotting that data against the average unit size for several municipalities in Canada, Toronto tops Vancouver with an average rent per-foot of $3.62 psf in April (Vancouver: $3.32 psf). The average unit size in the two top municipalities in Canada are fairly similar with Toronto at 751 square feet and Vancouver at 757 square feet.

On the opposite side of the spectrum is Quebec City; the average rent per-square-foot is just $1.48 psf, with an average unit size of 1,001 square feet. 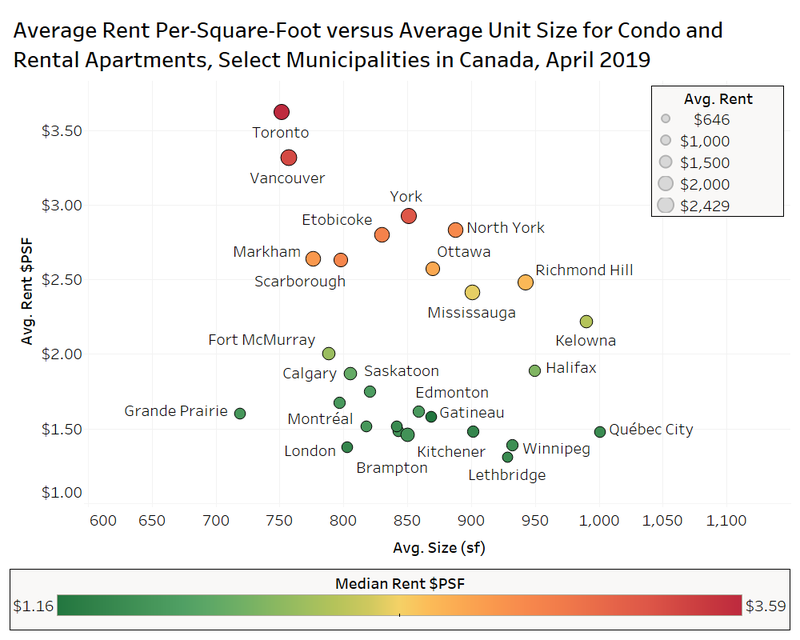 One bedroom or two bedrooms? The average tenant would likely prefer a two-bedroom unit over a one-bedroom unit, but because of affordability, they choose the smaller suite. The chart below looks at the condo and rental apartment breakdown by bedroom type for several of the top municipalities in Ontario. 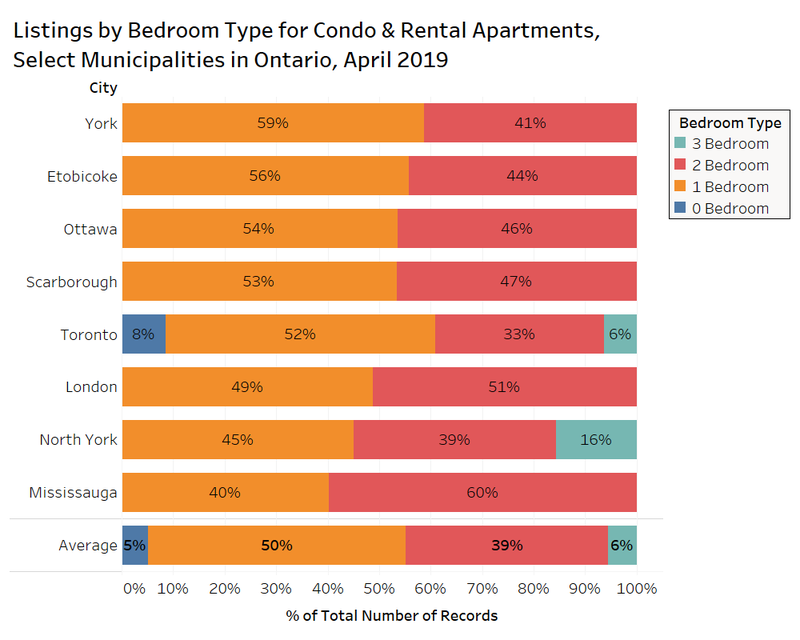 The highest share of two bedroom units for lease can be found in Mississauga at 60%, followed by London at 51%. 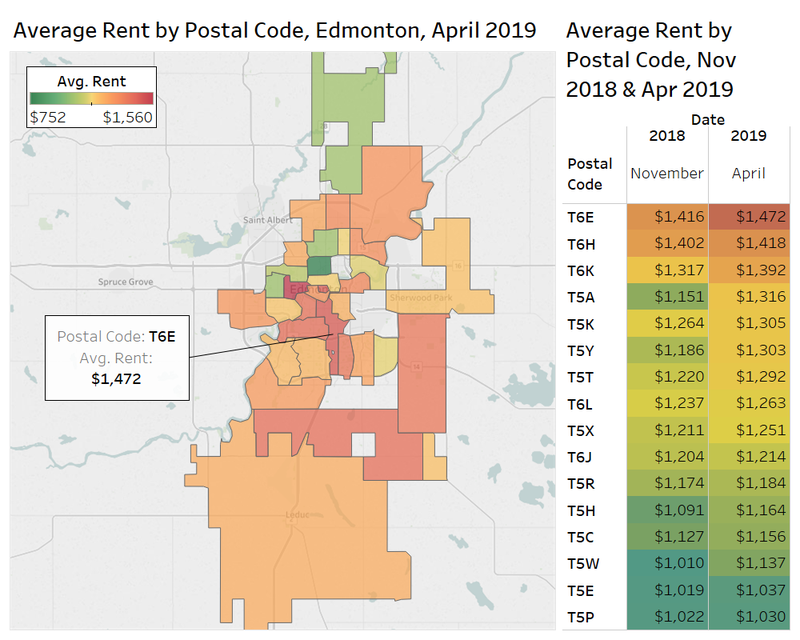 Following the removal of rent control on new buildings by the federal Progressive Conservative government last year, there has been renewed interest in building purpose-built rental apartments.

Several of the new rental apartments built in Toronto and North York over the past decade experienced extremely quick lease-up periods and rents in excess of nearby condominium apartment projects because of a desire by tenants for more security of tenure and on-site professional management.

The chart below shows the average rental rate by bedroom type at a selection of new and relatively new rental apartment projects in Toronto, North York and York.

The most expensive project is Two St. Thomas by Bentall Kennedy and Kingsett Capital in Yorkville. With an average rent of $3,682 per month, the project is targeted at luxury move-down buyers from the immediate area. Check out their virtual suite tours online.

Alto at 1544 Dundas Street West is in west Toronto in the Little Portugal neighbourhood. Overall, rents in this project average $2,539 a month, with two-bedroom units going for $3,750 per month on average. 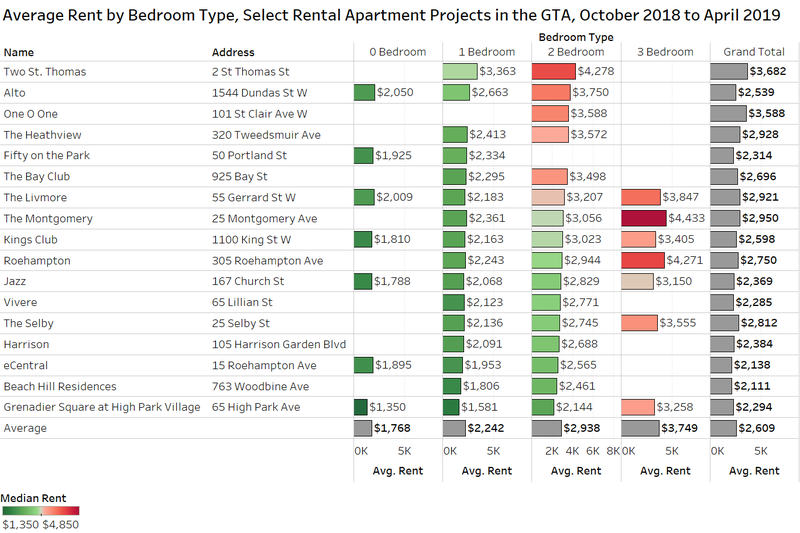 Since late 2018, almost half of the listings in these 17 projects have been one-bedroom units, with about 40% being two-bedroom suites. 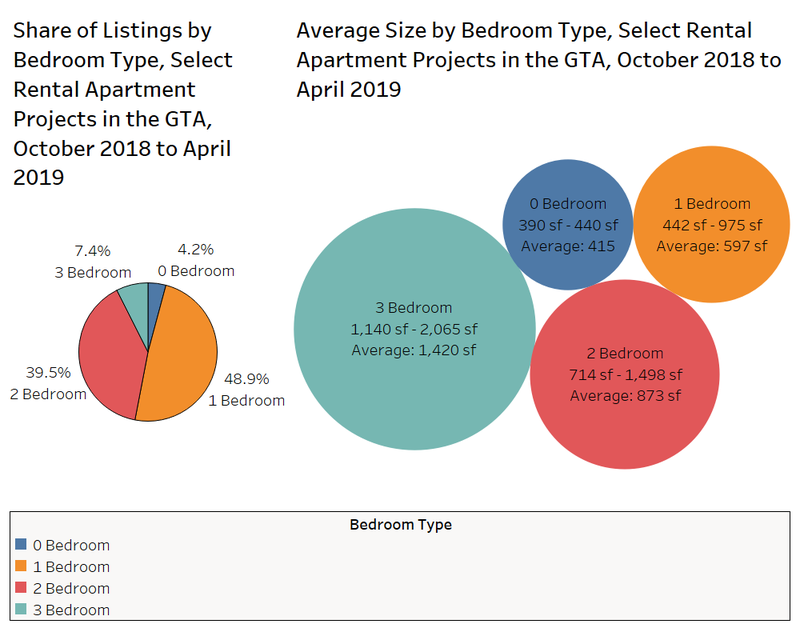 Units sizes were not available for all units in these projects, but for a notable portion of units, the rent per-square-foot can be calculated. The chart below shows the average and median rent per-foot by bedroom type at these 17 projects since October 2018. 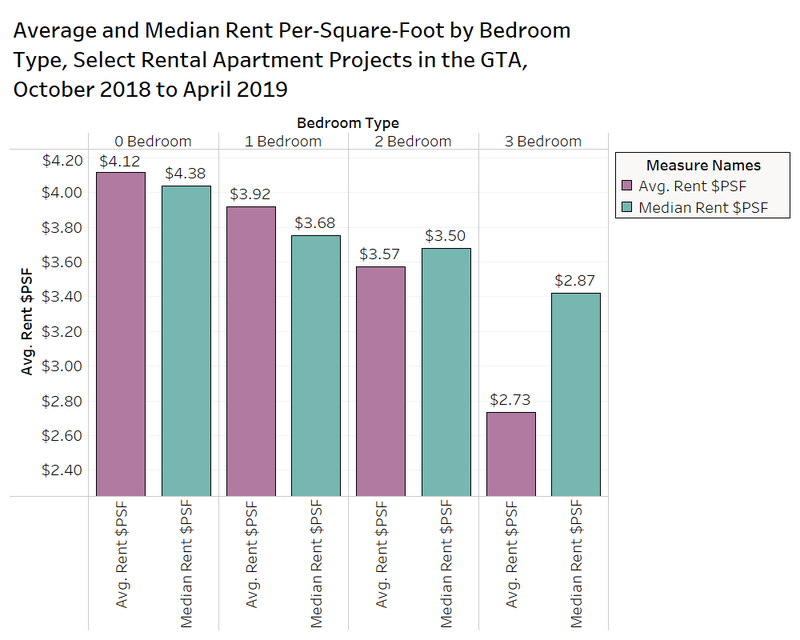 Rental rates declined for the second straight month in Canada per listing data on Rentals.ca, following sharp monthly increases in late 2018 and early 2019.

The general consensus among economists is that there will be no mortgage rate increase in 2019, which may spur some tenants to jump into the ownership housing market, freeing up units for other prospective tenants and easing upward rent inflation pressures.

In April, there were 14,697 new housing completions in Canada, the highest total of the year, likely adding new rental supply that helped cool rental rates.

A new Supply Action Plan announced by the Conservative government in early May is expected to increase housing supply in Ontario and curb the outsized price and rent growth experienced in the province over the past decade, but several pundits don’t expect the impact on the rental market to be pronounced.

It is more likely that high rent levels will spur new rental development, as the 17 new (and new-ish) purpose-built rental projects have seen their average rent increase from $2,586 per month in January to $2,767 per month in April. Condo quality features and finishes, with security of tenure, has resulted in very strong demand.

Despite the slight softening in market conditions overall, new product has continued to be popular with tenants in Canada. 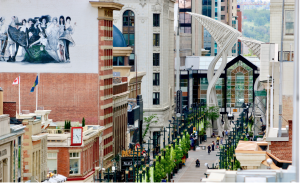 If you’re moving to Calgary or looking for a new place to live, finding an … 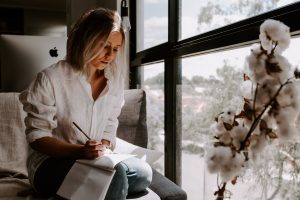 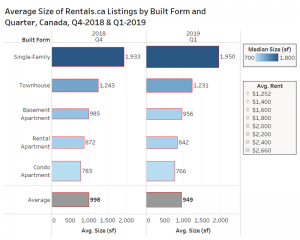 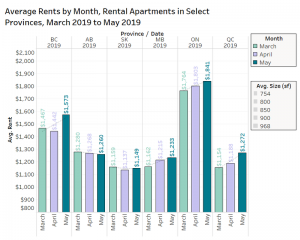 Average monthly rent up 4% in Canada following two months of decline, according to June rent report