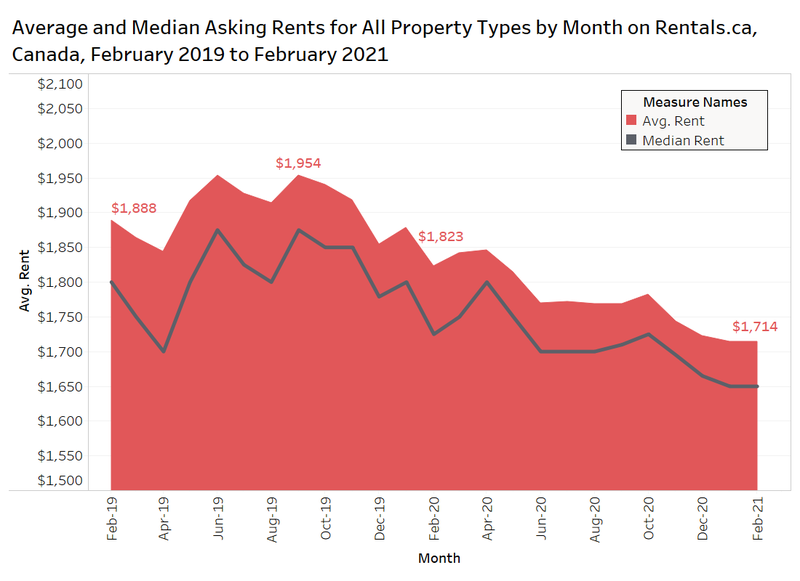 In December 2018, Rentals.ca and Bullpen Research & Consulting Inc. prepared a national rent forecast, as well as forecasts for several Canadian municipalities. These forecasts were based on all property types (basement suites, singles, semis, row and apartment), not just condominium and/or rental apartments.

The national forecast called for 6% growth, but with the fall in the December rent level, that forecast fell short, with the average rent increasing by just 4% annually as outlined above. However, the median rent increased by 8% year over year.

The biggest miss was Montreal, which was forecasted to increase by just 1% annually. However, the average rental rate increased by 25% from $1,286 per month to $1,611 per month. The sample size in Montreal is quite robust, but there were more downtown listings in 2019 versus 2018, which likely played a factor in skewing the December 2019 rent level upward.

Average rents in Vancouver increased by 11% annually, exceeding the 7% forecast. However, as a share of total listings, there were more higher-rent condominium apartment listings on Rentals.ca in 2019 than 2018, which pulled the average rent level up. 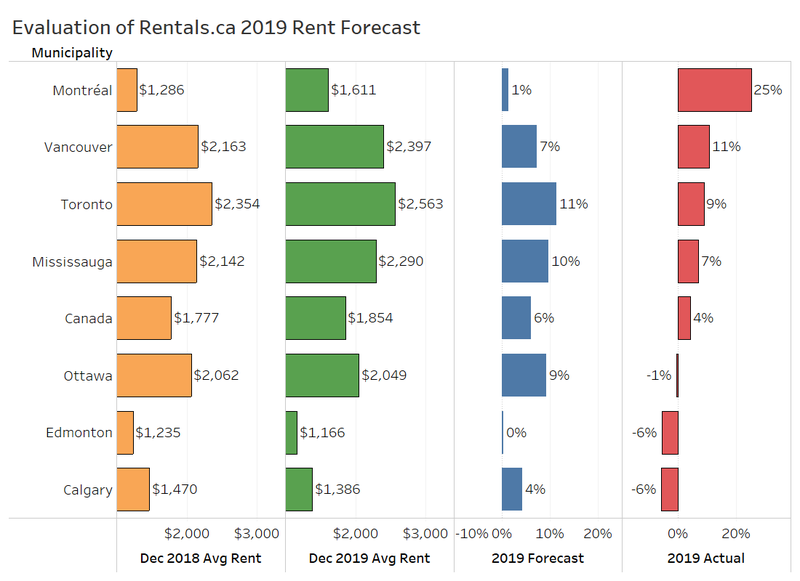 The best forecast was for the City of Toronto (former City, pre-amalgamation). The forecast called for a whopping 11% growth, but the market fell just shy, growing by 9% year over year. The median rent for all property types was up 10% annually from $2,225 to $2,450.

The chart below looks at the annual change in average rents, and rent per-square-foot by built form in Canada (Q4-2019 versus Q4-2018).

Rental rates were highest for single-family homes (single-detached and semi-detached) at $2,592 per month, followed by condos ($2,488), with basement apartments the lowest ($1,448). 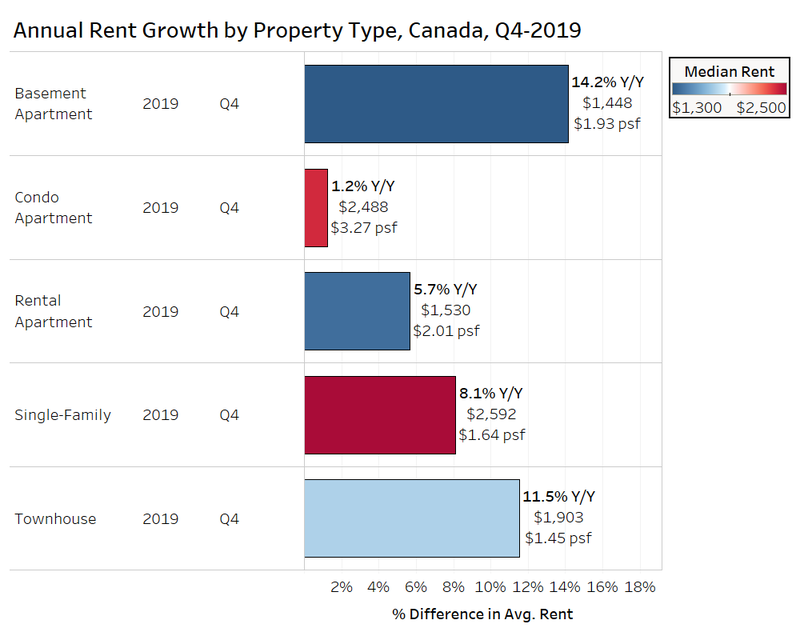 Average unit sizes for Rentals.ca listings by property type is illustrated in the chart below. With the exception of two-bedroom suites, the average unit size for all bedroom types in December 2019 have declined from December 2018.

The largest suite size change was in studios, which declined by 17% from 532 square feet (sf) to 443 sf. This figure is heavily influenced by the Toronto condo market, where investors and developers continue to offer small units in response to the affordability crisis and demand from first-time tenants for cheap accommodation in expensive neighbourhoods. 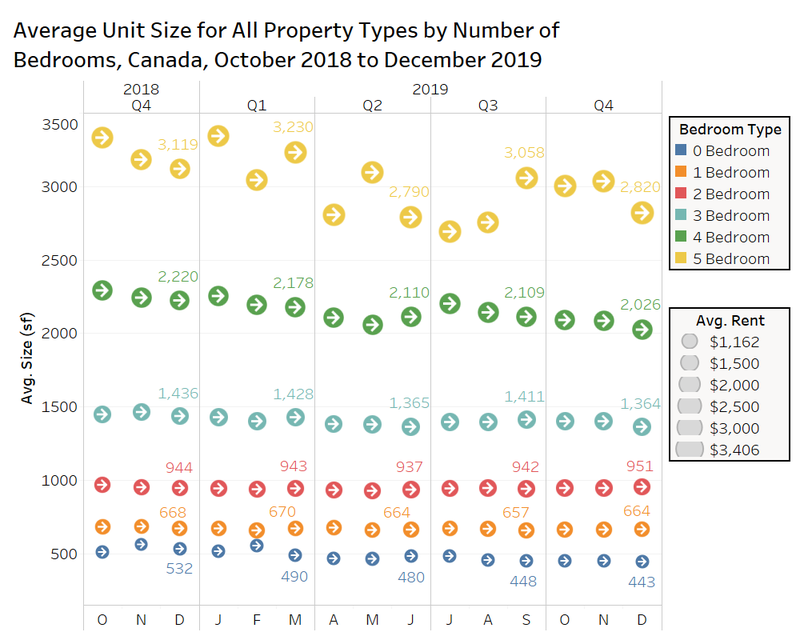 On a provincial level, Ontario had the highest rental rates in Q4-2019, with landlords seeking $2,318 per month on average (all property types). Ontario also has the highest share of condominium apartment listings at 37% of the provincial total, as shown via the orange portion of the pie chart for the province.

British Columbia had the second highest rental rate at $1,928 per month, while Newfoundland and Labrador had the lowest at $954. 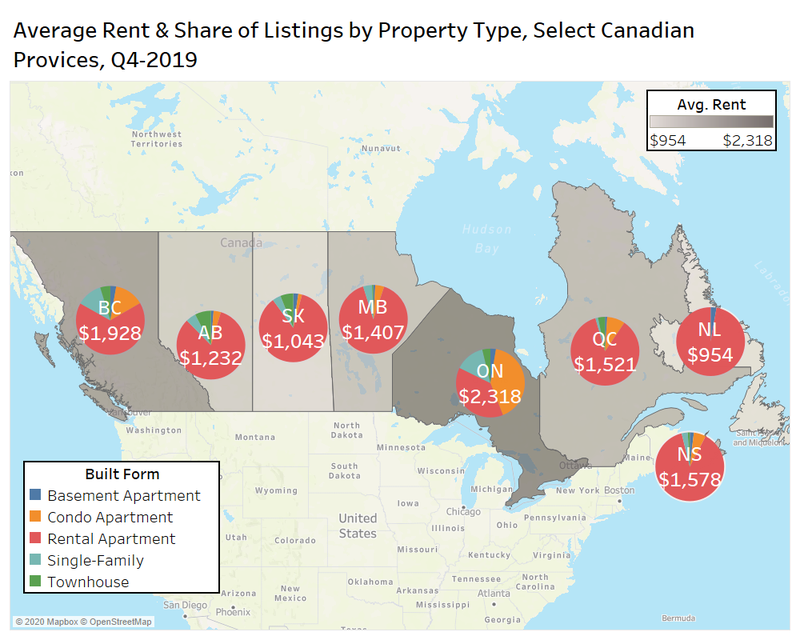 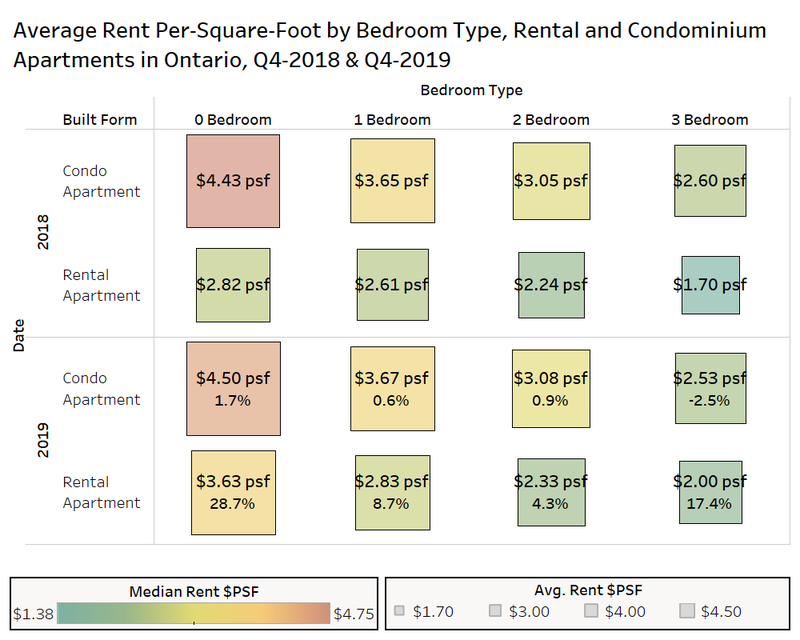 The chart below looks at rental activity for rental and condominium apartments in several major markets in Canada in December 2019 versus December 2018.

Both Scarborough and Montreal are experiencing rent appreciation for condominium and rental apartment at over 20% annually, with Scarborough topping the list at 24.3% annual growth. Winnipeg achieved the third highest gains at 19.9%, with North York increasing by 18.1% and Kitchener rounding out the top five at 16.2%.

At the other end of the spectrum, select cities in Alberta and Saskatchewan made up the bottom five. Saskatchewan suffered the greatest declines, with Saskatoon experiencing a substantial rent drop of 15.2%, with Regina not far behind at 13.6%. In Alberta, the average rent in Edmonton declined by 8.6%, Red Deer dropped 7.4%, and Calgary declined by 3.9%.

Toronto condo and rental apartments increased by 10.0% in 2019, with the average rental rate being the highest of all municipalities at $2,509 per month. 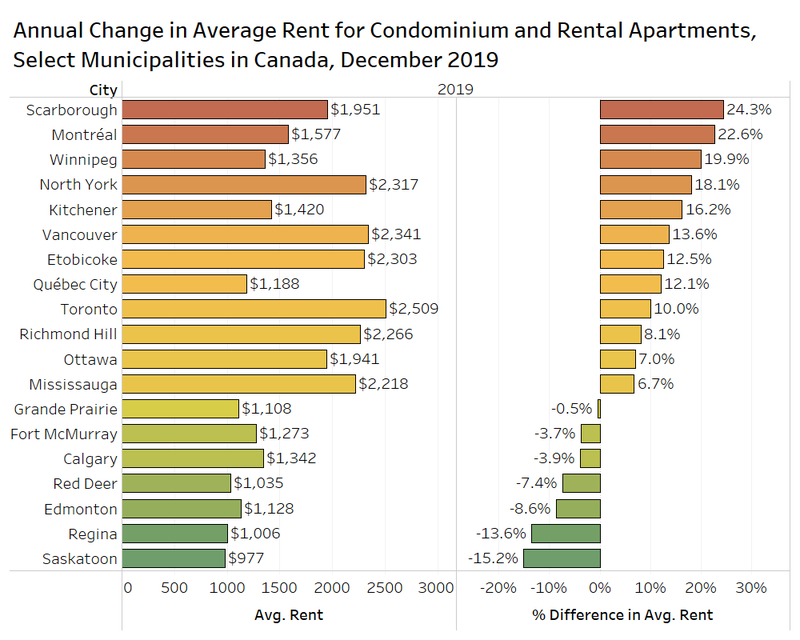 Average rent for all property types for Q4-2018 and Q4-2019 for select municipalities in Alberta is shown in the chart below. With the exception of Banff, which is primarily a tourist destination that is not heavily impacted by the oil and gas industry, the average rent decreased in each of major municipalities in Alberta. Calgary decreased by 5.5%, while Edmonton declined 3.7%.

Rents declined on a municipal basis, but these rates can be skewed by changes in the sample of listings year over year. For a more accurate look at annual changes in rent, a look at average rents at specific buildings can shed some additional light on the market.

The chart below compares the median rent in 2018 and 2019 (fourth quarter) for select projects in Banff, Calgary, Edmonton and Red Deer. Centre Pointe West at 1313 – 13 Avenue SW in Calgary had the highest average rent among these projects at $1,724, an increase of 11.6% annually. Oak Hill Estates, a townhouse community at 6440 Centre Street NE in Calgary saw rents increase by 9.4% in 2019. The lowest average rent was $1,339 at the Saratoga Tower at 10 Stanton Street in Red Deer, a decline of 5% annually. As the chart shows, several landlords have continued to raise rents, despite the softer economic conditions. 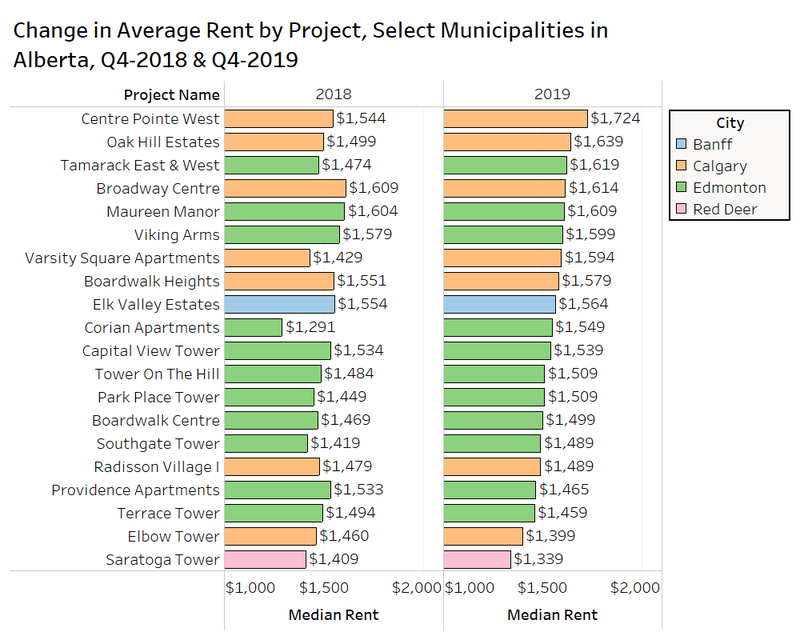 The top of the first chart in this section is a density map showing the locations of all of the condominium apartment and rental apartment listings in the City of Toronto (new boundaries with Etobicoke, North York, East York, York and Scarborough).

The bottom of the chart shows the average rent per square foot (psf), split by the tenure of the apartments. The average rent per square foot for condos in Toronto in Q4-2019 was $3.55 psf based on an average unit of 764 sf. This rental rate is down from Q4-2018, where landlords were asking $3.61 psf for a slightly smaller average unit size of 746 sf. Given the rapid growth in rental rates in Toronto overall, the flat per-square-foot rents for condominiums is baffling, especially given the number of new condo buildings completed in 2019 was well below expectations due to construction delays. 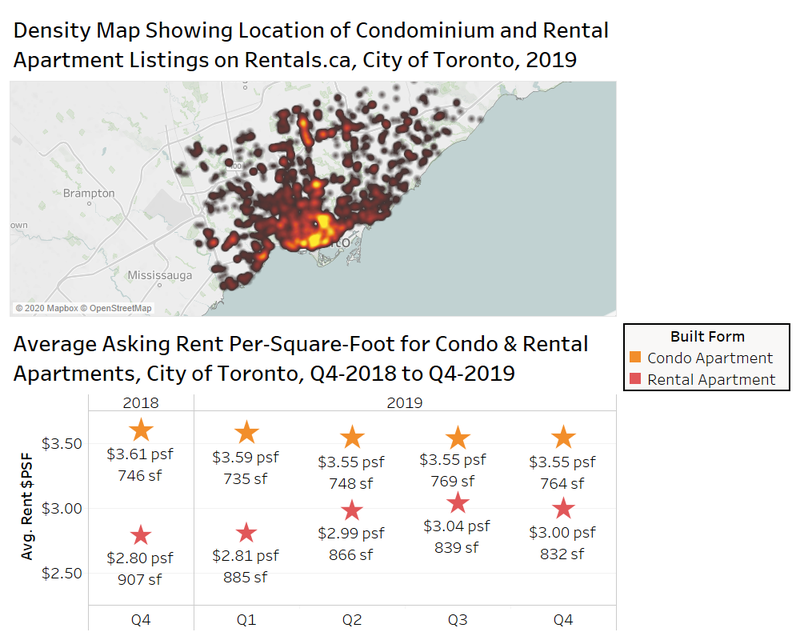 Average rents can be skewed by a high concentration of listings in an affluent area, or the presence of a new luxury project with lots of vacancies. Looking at the change in the rent percentiles can provide information on where the market is moving or stalling.

The 90th percentile of condo rents in the former City of Toronto (pre-amalgamation) was unchanged in December 2019 versus December 2018. There has been little movement in the luxury condo rental market (however, keep in mind that Rentals.ca only tracks units listed for $5,000 or less in this report).

The biggest rent movement for condos was at the bottom of the market, as the 10th percentile increased by 3.6% year over year.

The most expensive rental apartments (90th percentile) saw average rents increase by 9.8% annually in 2019, while the 10th, 25th and 75th percentiles increased by 21%, 18% and 21%, respectively. The highest appreciation and the biggest “log jam” in the market is occurring at the bottom of the market, with the cheapest rents (10th percentile) rising from $1,277 per month to $1,550 per month. 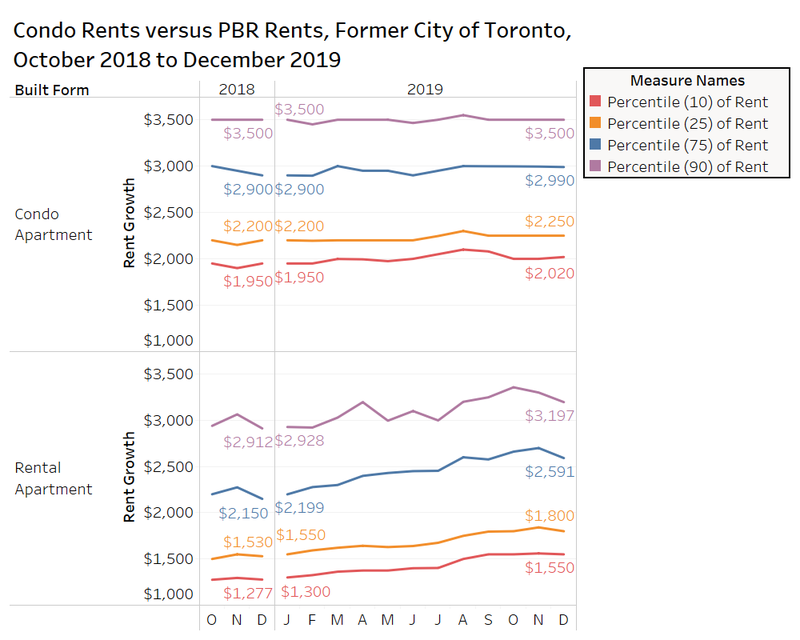 There has been much discussion about condo investors and the rental rates required to break even on those investments. The relatively flat growth in rental rates in 2019 was in sharp contrast to the 10% to 15% rent growth for condos in 2018.

Many of the investors buying pre-construction units in 2019 will need rental rates of $5.00 psf per month to $6.00 psf per month to cover their monthly mortgage costs, condo fees, and taxes. But keep in mind most condo units purchased in 2019 will not be completed unit 2023 at the earliest. The chart below looks at several of the most active new condo projects in terms of listing activity on Rentals.ca in 2019, and their average asking rent per square foot. 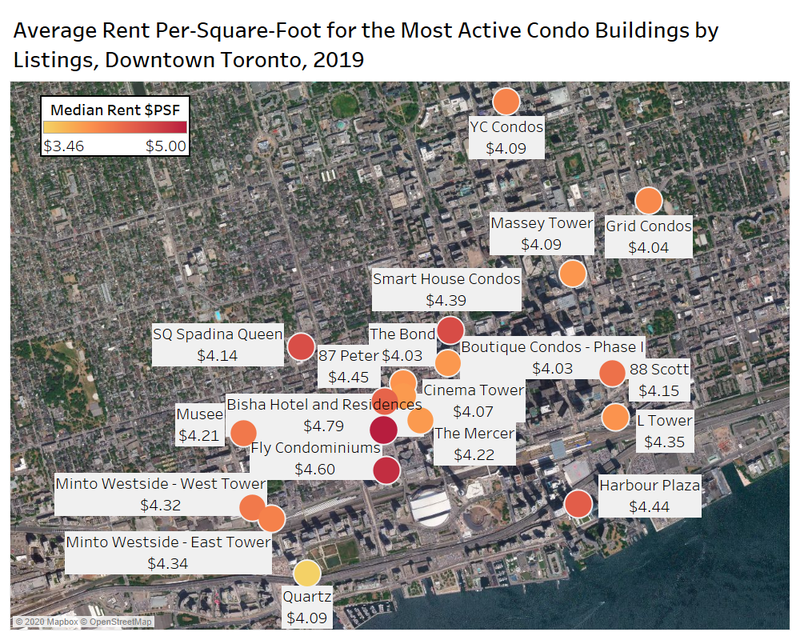 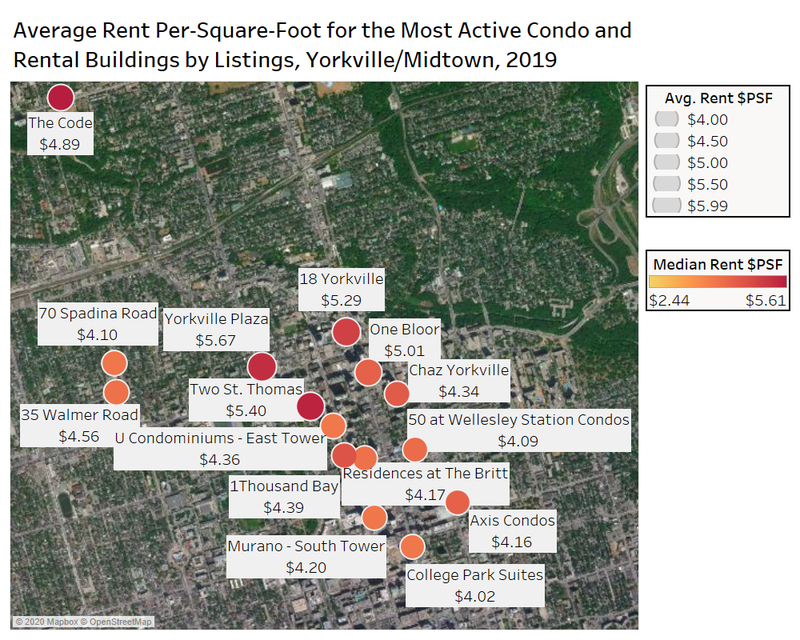 Rentals.ca partner Local Logic provided insights for renters lifestyle interests and found many millennial families want more than anything to live near a quality school.
“As more families continue to rent as opposed to buy, we see renters for larger homes are willing to sacrifice their ability to take transit or walk to get their groceries in favour of being near a quality school,” says Vincent-Charles Hodder, CEO of Local Logic. “We expect the rental markets to perform strong in areas close to schools in 2020.” Below is a Toronto specific chart showing renters interest. The sample includes about 5.5 million listing views coming from around four million users.

Asking rents for all property types in Toronto, Vancouver and Montreal increased by 9%, 11% and 25% annually in 2019; the three most in-demand cities in Canada are experiencing significant rent growth.

Despite affordability concerns, young tenants in all three municipalities are looking for walkable downtown communities where they can live comfortably without the expense and burden of owning a car, and without a crippling commute. The cheapest properties in the market are being snapped up quickly, and rent growth is highest at the bottom of the market. Young professionals are squeezing into smaller units and living with roommates well into their 30s.

Tenants are now competing with baby boomers as well, as they cash out of their homes and downsize. They’re looking for the larger and more upscale purpose-built rental apartments that are now opening in Canada’s major markets.

With this huge rent growth, more patient capital is looking to get into rental development, with insurance companies, pension funds and international wealth funds partnering with domestic investors for high-end rental buildings. Also, REITS and other long-term commercial property owners are looking to densify their properties with new rental apartments, but they are using aggressive revenue assumptions based on higher government fees, high construction costs, high land costs, and development risk.

New rental apartment completions in 2020 in the core downtown markets will have rental rates in excess of comparable condominium apartments for lease before taking into consideration they charge separately for parking.

Despite an increase in new rental apartment construction, the crackdown on empty units and AirBnB in several markets, rental affordability is expected to get worse in 2020 in British Columbia and Ontario. Rentals.ca is forecasting more modest rental growth in 2020 versus 2019, but the expectation is average rents will grow faster than inflation in most major markets outside of Alberta and Saskatchewan. 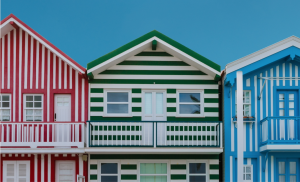 Deciding where to live in Halifax is tricky because it depends on your needs. Are … 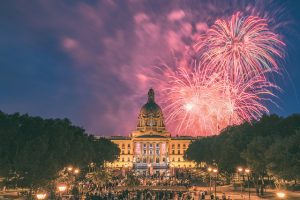 The Top Family-friendly Neighbourhoods in Edmonton

Edmonton isn’t the safest city to live in. In fact, its crime rate often makes … 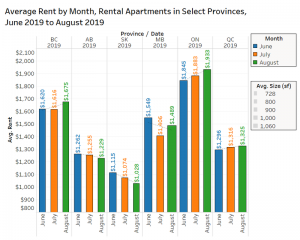 The average property listed on Rentals.ca in August was offered for rent for $1,914 per … 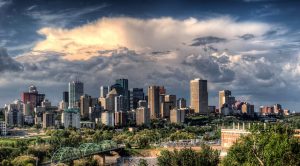 Finding a new apartment in Edmonton can be a hassle, but using a great rental …